My son’s dinosaur phase was no fleeting passion. We spent (at least) a solid year reading mostly dinosaur books, searching for correct pronunciations on Youtube (okay, that was just me), and looking at each other knowingly when someone referred to a pterodactyl as a dinosaur (*cough* pterosaur *cough*). Sadly, most of that incredibly useful information has fallen out of my brain, but it’s probably outdated now anyway. Brontosaurus was a type of sauropod! Just kidding, brontosaurs never existed! Wait, scratch that, brontosaurs are back on the table! Who can keep up?

That said, even an English major like me who took oceanography for my science credit can find much to love in a year of dinosaur immersion. Here are the titles both a
dinosaur obsessed girl or boy AND parent of said kiddo will enjoy.

When Dinosaurs Came With Everything by Elise Broach and David Small

This is my go-to gift for every dinosaur themed birthday party. It is illustrated by David Small, which means I automatically love it, but it is so much more than brilliantly illustrated, though it is absolutely that. You can read this book as a bedtime story every night without tiring of it (I know from experience), and it is so clever and fun that I really can’t imagine anyone not absolutely loving it. In fact, I checked reviews on Amazon to see what the 1, 2 and 3-star reviewers said, and basically they got a weird Cheerios promotional cereal box version of the book and were mad that they didn’t get the real deal in all of its glory. Buy this book today; it’s worth it. As a bonus, if you happen to have been recently invited to a Dinosaurs and Donuts birthday party (win!), this book features both.

We Don’t Eat Our Classmates by Ryan T. Higgins

This book will make your children laugh until they can hardly breathe. Unless it terrifies them. So maybe you should preview it first.

For the word-lover and dinosaur-lover alike!

For the illustrations alone!

Oh, William Joyce. I would live in one of your whimsical worlds if I were, you know, cooler and braver.

Are the Dinosaurs Dead, Dad? by Julie Middleton and Russell Ayto

Another funny one that needs a preview for any faint of heart kiddos.

Barnum’s Bones: How Barnum Brown Discovered the Most Famous Dinosaur in the World by Tracey E. Fern and Boris Kulikov

I’ve left off most of the non-fiction we read that year, mostly because it becomes obsolete so quickly, BUT you can’t go wrong with a bio, especially this one.

Edwina, the Dinosaur Who Didn’t Know She Was Extinct by Mo Willems

I know everyone loves Mo Willems (and for good reason), but it does feel a bit like recommending Dr. Seuss (have you heard of this awesome book about a cat in a hat??). Edwina, however, is a bit lesser known than Willems’ Elephant and Piggie or the Pigeon, and honestly I couldn’t write a dinosaur post without mentioning her anyway. She is a DELIGHT. 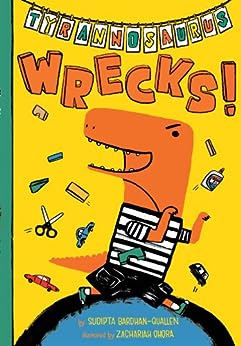 Fun rhymes, great story, lovely message. Great for the youngest of readers (though the big kids will probably like it, too).

Beautiful and Caldecott award-wining. Wordless, too, for those days you don’t feel like talking, but would take the snuggle time.

The Dinosaurs of Waterhouse Hawkins by Barbara Kerley and Brian Selznik

This was my first introduction to Brian Selznik, and what a lovely one it is. Resilience, courage, creativity, so much to share with your kid in this one.

It has been many years since I read this one, but I couldn’t leave it off because 1. Sesame Street, and 2. I distinctly remember thinking it was terribly clever, and I was such a dinosaur snob at the time that I trust my judgment.

Dinotopia: A Land Apart from Time by James Gurney

Wait. If you haven’t heard of Dinotopia, stop reading this post and buy it now. I clearly didn’t put these books in order of importance, otherwise this one would have been much closer to the top of the page. (Also the fun doesn’t stop – Gurney wrote more of these! I haven’t read the chapter books, though – only the stunningly illustrated coffee-table version.)

What the Dinosaurs Did Last Night by Refe and Susan Tuma

Having our very own DINOVEMBER is now on my Before-my-kids-are-too-old-to-care Bucket List. But given that authors Refe and Susan both seem to be having a blast with this enterprise themselves, I probably have plenty of time. They not only took photos of the antics their family’s toy (“toy”) dinosaurs were up to throughout the night, but they captioned them brilliantly, which makes this the one blog you absolutely need in book form.

Even though this info will be dated eventually (if it isn’t already), it is absolutely worth it for the pop-ups. You haven’t seen pop-ups if you haven’t read one of Reinhart’s books. 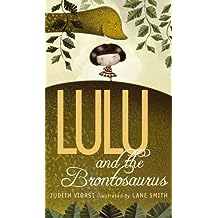 Lulu and the Brontosaurus by Judith Viorst and Lane Smith

From the author who brought you Alexander and the Terrible, Horrible, No Good, Very Bad Day, comes Lulu and the Brontosaurus, which would have been hilarious with zero illustrations, but absolutely comes to life with Lane Smith’s genius added to the mix.

I really can’t end a dinosaur post without sharing one more story. If you’re willing to
endure library envy, I’ll tell you about ours, the Beverly Cleary Children’s Library, which boasts a 14-foot cast bronze tree with storybook characters, letters, numbers, and all manner of delight carved into its trunk. The most magical bit, though, is that as children interact with the tree, the items they touch shine brighter, so you’ll know which items are a fan favorite (the strings on the violin that actually make a sound when you “pluck” them, the tiny bird by the desk counter). My son discovered a dinosaur tucked behind the tree at the base, where few little hands will find it, and he made it his mission (for that dinosaur-themed year at least) to touch it every week so it could shine as brightly as it should.
So read on, and shine brightly, little dinosaurs.